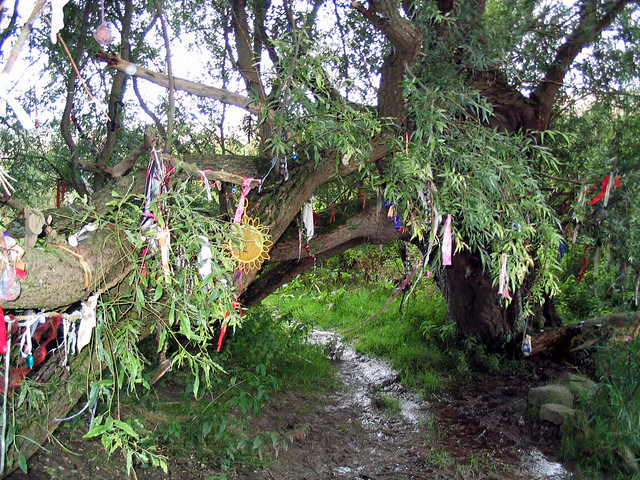 If you’re going to the British Isles for spiritual exploration, you will want to know about clouties (also spelled clootie). What’s a cloutie? Clouties are prayer ties. Traditionally these were small pieces of cloth that were infused with the energy of what you want to get rid of (like a wart, an unwanted lover, or a pain). If the thing you want to rid yourself of is an ailment, the cloth is first tied around that area.

For example, if you have ankle pain, the cloth is worn around the ankle. The prayer tie is then hung on the tree as a request to the spirits to use their energy/magic to banish the unwanted energy. As the cloth decays, the wish is fulfilled.

Today, the tradition has been corrupted in many ways. Any old tree at or near a sacred site is often chosen. Traditionally they were trees located at springs. It’s the spirit of the well or spring that does the healing, not the tree. These springs sometimes have minerals that promote healing. They generally are known for curing specific types of ailments like infertility or eye issues. So hanging a cloutie on any random tree is not likely to create any healing.

Many things are tied to these trees as “offerings.” I’ve seen random things like jewelry, bolts, stuffed animals, plastic streamers, and pieces of clothing. My guess is that two traditions are being confused. At some sacred sites, it’s traditional to leave an offering in exchange for a wish. The offering must be something that has value to you. If it’s not a sacrifice to give it up, the spirits will not fulfill your wish. The cloutie tradition is not about granting a wish. It’s banishing magic. It’s designed to rid you of something, not give you something. If you are making an offering to the spirit of the well or spring, it is not tied to the tree, but left by the spring.

Small cloths are used because they wrap easily around an ill body part. The cloth is sometimes dipped in the water, then is used to wash the troubled area. Cloths are easily tied, and they degrade quickly. If you are tying something to a tree that is not biodegradable, the magic can’t work. So what ends up happening is that the tree accumulates trash that chokes its growth, and may actually kill the tree. It also becomes an eyesore.

Why a well? Why not just tie clouties anywhere? Sacred springs are the bridge between this world and the Otherworld. The bridge was open widest at certain times of the year (Imbolc on February 1, Beltaine on May 1, Lughnasa on August 1 and Samhain on November 1), so that is when they were most often visited. Sacred springs are also almost always found on a hill upon which lives an old tree. Not all wells are sacred wells.

PROPER ETIQUETTE AT A CLOUTIE WELL

So what’s the proper etiquette at a cloutie well?

Don’t drink the water. While part of the healing ritual used to include drinking the water, unless there is a sign saying that the water is potable, do not drink it. You can use it for sprinkling and blessing, but don’t take it internally. What looks cool and inviting may be teeming with toxins and bacteria.

Only leave clouties at cloutie wells or springs. (Hair is also acceptable). Dotting the countryside with synthetic ribbons and trash won’t grant you any wishes or healing. Also, if the tradition becomes corrupted because of popular disinformation, the wrong thing becomes the accepted thing. Then the tradition is lost. So please do not leave clouties anywhere except established cloutie wells. Tradition has a place and a purpose. It would be a shame to lose it because of the acts of those who want to honor it.

If you’re going to leave a cloutie, make it something small and of a natural material so that it deteriorates. Magic is released through the disintegration of the fabric. No disintegration, no magic.

Flames often accompany meditation and ritual at sacred sites. Before lighting a fire in nature, make sure that it is permitted at that site. If so, limit flames to a votive candle so that the fire is always contained. Fire is potentially hazardous. You always want to leave a site unspoiled.

Don’t take anything. Leave everything as you found it. It’s tempting to take a souvenir. You might think, “Oh, it’s just a tiny pebble. It won’t matter.” If a hundred people feel the same way, the site would soon become damaged. You might even be tempted to clean up the litter. Don’t. Taking something from a sacred site is considered bad luck. Taking someone else’s offering is bad karma. So, even if the wrong thing is left in ignorance or poor taste, leave it.

Be quiet. Fortunately, being in a sacred site inspires silence; however, some don’t seem to feel this call. You can only hear the spirits speak to you if you are still. Tune in. Allow others the silence to tune in.